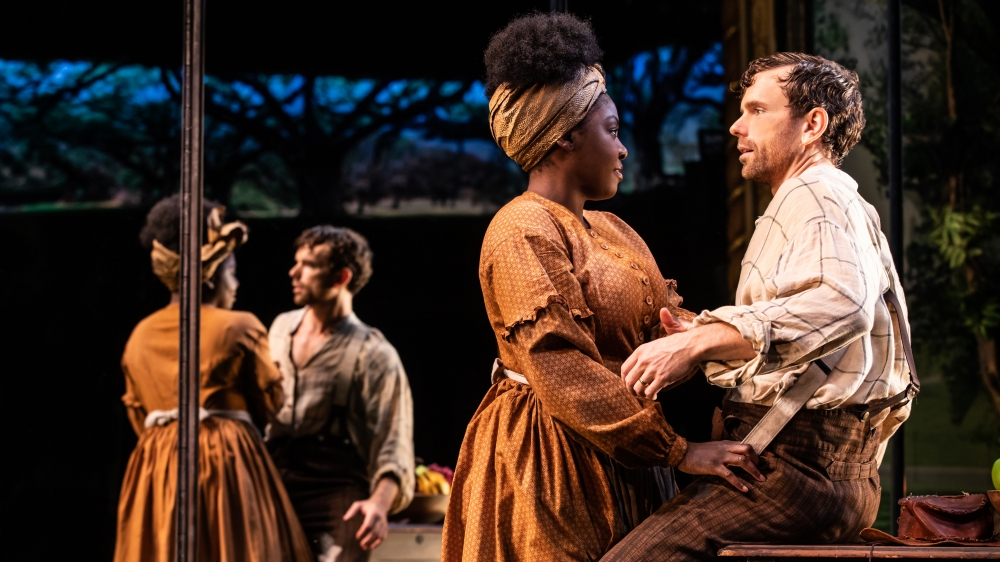 Last weekend, the American Theatre Critics Association hosted its fall convening at MCC Theatre in midtown Manhattan. The days were packed with panel discussions and vigorous discussions about the state of theater criticism and the urgent need to diversify the field. The group is still very much divided on these issues as many veteran theater critics in the field see the evolution of the field as an erasure of their existence. I’m reminded of the quote “When you’re used to being in control, compromise feels like oppression.” Here are my conference highlights:

“for all the women who thought they were Mad” at Soho Rep This sci-fi drama is set under water in a world much like this one where African women are killing themselves because of the pressure to have babies and gaslighting in mostly white work environments– I think. West African folklore and American ambition collide in this world premiere by Zawe Ashton and directed by Whitney White. In it, a woman named joy is climbing the corporate ladder when an unexpected pregnancy derails her plans. While Joy’s life unfolds in the past, the women in her village back in Africa prepare for her funeral and recount the events that led up to her death. Joy is inside of a glass cube, decorated to look like an office, at center stage for most of the play. There are some good elements to this production, but ultimately it falls apart for lack of clarity. I’m not really sure what deeper truth Ashton is trying to relay here, and frankly I’m a bit worn of plays that depict black women as clinically insane.

“Tina: The Tina Turner Musical” at the Lunt-Fontane Theatre I saw a preview performance of the Broadway musical based on the life of rock n’ roll icon Tina Turner. If you’re coming for big hair, high kicks and sequins galore, this musical is exactly what you’d expect. The last 15 minutes are basically a concert, and Adrienne Warren, who plays Turner, delivers a great performance. However, if you’re looking to learn more about Tina Turner than what was relayed in the 1993 biopic “What’s Love Got to do with It?” or from her books, keep looking. The musical, directed by Phyllida Lloyd (“Mama Mia!”) and written by Katori Hall (“The Mountaintop”) with Frank Ketelaar & Kees Prins, follows Turner’s journey from a little girl singing in her abusive father’s church in Nutbush, Tenn. to becoming a pioneer of rock music. I have no doubt that this show will be a hit and tour nationally, but I hope that the creative team can smooth out the kinks of the sloppy scene transitions before opening night.

“Slave Play” at the Golden Theatre Jeremy O’Harris’ plantation dramedy is one of the most talked about plays of the last two years. Since its premiere at New York Theatre Workshop last year, the show has evoked visceral responses, some calling it brilliant and others deriding its depiction of black people as willingly giving up their freedom. The crux of the piece is that three interracial couples have willingly gathered at a Virginia plantation for antebellum sex therapy to heal their relationships. It seems here that O’Harris posits that the only way black people can be in relationship with white people is to give up their right to consent. What the play does well is depict the ways in which black people are often forced to coddle white people’s emotions when conversations about race come up.

The simple set is a mirrored room with lyrics fro Rihanna’s “Werk” hanging from the ceiling and a painting of plantation affixed above the orchestra. O’Harris attempts to hold up a literal mirror to the mostly white audience of the behaviors they engage in that disenfranchise black people. However, it’s important to remember that this is his first play and so the characters are not particularly well-developed and the language of the play is not poignant or beautiful. The characters heavily rely on stereotypes that are steeped in colorism, making the actors bodies onstage in service of an idea. This distance between actor and character is probably healthy though, otherwise this play could be potentially humiliating, especially for the black actors onstage (SPOILER: a black woman eats cantaloupe on her knees and is later raped).

So, I’ll say this, If you want to see “Slave Play,” make the trip to NYC, because I doubt it will have a life in the regional theater, and frankly the south doesn’t need it. However, if you don’t see it, you have seen it in a blaxploitation film that did it better with Melvin Van Peebles starring in it a few decades ago.

Who are we without our memories?